How have firms' views on financial stability risks in the UK evolved in recent months?

The purpose of Bank Overground is to share our internal analysis. Each bite-sized post summarises a piece of analysis that supported a policy or operational decision.
We regularly survey market participants to find out how confident they are in the UK financial system and what risks they believe the system is facing. Firms are most concerned about cyber, geopolitical and inflation-related risks.

Early this year, we conducted the 2022 H1 Systemic Risk Survey asking market participants how confident they are in the UK financial system and what risks they think the system is facing. The survey ran between 24 January and 14 February, concluding before the Russian invasion of Ukraine.

Cyber-attack risk and geopolitical risk remain among the top three most cited risks, and have been since the 2017 H1 survey. There have, however, been notable changes in the perceived importance of other risks to the UK financial system since the 2021 H2 survey (Chart A). Pandemic risk is no longer a top three risk among survey participants, with most firms now citing inflation risk instead. In addition, the percentage of participants citing UK political risk as a key risk fell to its lowest level since the EU referendum (2016 H1 survey) – with 26% of respondents citing it. 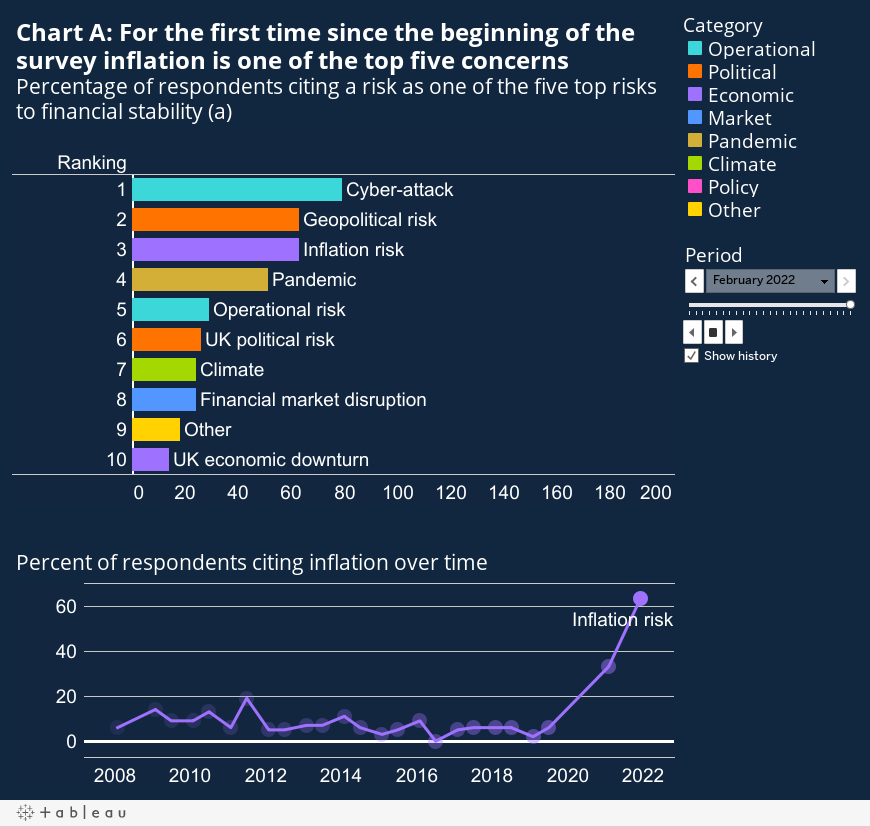 The largest change since the 2021 H2 survey was around inflation risk, becoming one of the top five most cited risks for the first time since the survey began in 2008. It was cited as a key risk by 33% of respondents in 2021 H2, but this has now risen to 63% (bottom panel of Chart A). This reflects the expectations of higher inflation and the subsequent impacts on the economic outlook among survey participants.

Respondents were also asked to indicate which three of the five key risks they cited would be the most probable to materialise. Inflation risk was the most cited at 58% and cyber-attack remains at similar levels to the previous survey – cited by 55% of respondents.

Climate risk, previously captured under operational risk, is being cited more often as a key risk to the UK financial system. In the recent survey, climate risk was cited by 24% of respondents and captured concerns around physical, transitional and environmental risks. However, no respondents cited this as a ‘number one’ source of risk.

This post was prepared with the help of Raouf Atia and Joshua Perers-Cook.

This analysis was previously published in the 2022 H1 Systemic Risk Survey.

How much of the recent house price growth...

How much of the recent house price growth can be explained by the ‘race for space’?

The impact of the Covid pandemic on SME indebtedness

The impact of the Covid pandemic on SME indebtedness

How sensitive is UK corporate debt to increases...

How sensitive is UK corporate debt to increases in debt-servicing costs or earnings shocks?