On 3 November 2017, Andy Haldane visited Greater Manchester in partnership with Oxfam to discuss the effect of the raised interest rate.

On 3 November, I visited Greater Manchester on the latest of my Townhall tours.  This time’s visit was organised in partnership with Oxfam, who put together a fantastic programme for the day involving roundtable discussions and conversations with a truly inspiring set of people drawn from think-tanks, community groups, volunteer organisations, companies, banks, credit unions, local councils, housing associations, foodbanks, as well as Oxfam staff and volunteers.

The visit was well-timed, coming a day after the Bank’s Monetary Policy Committee had raised interest rates for the first time in over a decade, from 0.25% to 0.5%.  The visit was a chance to hear first-hand how this had landed in the North-West of England, among communities who were in some cases struggling financially.

Like many cities and regions across the UK, Greater Manchester is a city of contrasting fortunes.  On the one hand, it has benefitted significantly from its status as centrepiece of the Northern Powerhouse, with a thriving city centre generating rising incomes and jobs.  There is a real spirit of optimism in Manchester, probably helped by its two main football teams lying first and second in the Premier League.

On the other, Manchester is a city with above-average levels of unemployment, with youth unemployment rates in excess of 17%.  It ranks as one of the top-5 most deprived cities in the UK, on some measures.  And levels of homelessness in Manchester are among the worst in the UK.   This is a latter-day “Tale of Two Cities”.

This polarisation in Greater Manchester was summarised for me, memorably, by one of the attendees as the “ring doughnut” effect:  a buzzy city centre, well-healed rural suburbs, but with an outer ring of the city which was stagnating.  From my regional visits, I think this doughnut effect is present in many cities and towns across the UK, even those which are perceived as having done well, like Manchester.

Many of the reasons given by participants for this polarisation are probably familiar:  shortages of decent housing at a reasonable cost, insecure and low-paying work, the difficulties of navigating the benefits system, low levels of core skills including financial literacy, limited access to financial services on affordable terms, ineffective or expensive public transport systems and rises in the cost of living.

For most of the people I spoke with, small adjustments in the cost of borrowing were unlikely to have a significant impact on their daily lives.  The borrowing costs they faced for access to consumer credit were largely unaffected by changes in Bank Rate.  And many had few, if any, savings on which to draw.

The Bank’s interest rate decision does, however, affect everyone through its impact on their cost of living.  Indeed, the main reason the Bank raised rates last week was to keep a lid on inflation.  Price rises across the whole economy are currently running well above the 2% inflation target and are expected to remain above-target for the next few years.

It is well-known that increases in the cost of living hit hardest those on lowest incomes.  Rising inflation worsens the well-known “poverty premium” the poorest in society already face in the higher costs they pay for the everyday goods and services they buy.  Inflation further squeezes the dough in the doughnut.  The rise in inflation through this year has already generated such a squeeze on many households’ purchasing power.  This is not something the Bank, or anyone else, should wish to see continuing for years to come – hence the nudge up in interest rates.

Keeping the cost of living in check is not the only thing the Bank can do to help those struggling in society.  Another is to broaden access to banking and finance.  Shockingly, there are still around 2 million people in the UK without access to a bank account.  The Bank can play its part by encouraging new entrants into banking.  And, indeed, that is precisely what has happened recently, with more new banking entrants in the UK in the past decade than in the preceding century.
The Bank can also ensure its actions support smaller, local financial services providers.  In the North-West, credit unions play a crucial role in supporting local communities – this is something I have heard repeatedly on my visits to the North-West over the years.  The Bank aims to be “proportionate” in its regulatory actions to ensure these local service-providers are not disadvantaged.

Finally, the Bank can play an educational role with the general public, helping them understand how the economy and financial system affects their lives and helping them make everyday decisions.  This is a priority area for the Bank over the next few years, with a particular focus on young people.  Later this month, we will be unveiling some of the Bank’s educational initiatives in schools at our Future Forum in Liverpool.

I would like to thank all of the participants in Greater Manchester for their passionate, candid (sometimes brutally candid!) and often poignant contributions – they have stuck with me and will help shape my and the Bank’s thinking.  Huge thanks, too, to our superb partners at Oxfam (with particular thanks to Graham, Josh, Nancy, Chris, Justin, Jo and participants from Oxfam’s Future Skills forum) and to the Bank’s Agents in the North-West, John and Brian.  My next stop is the West Midlands in late November. 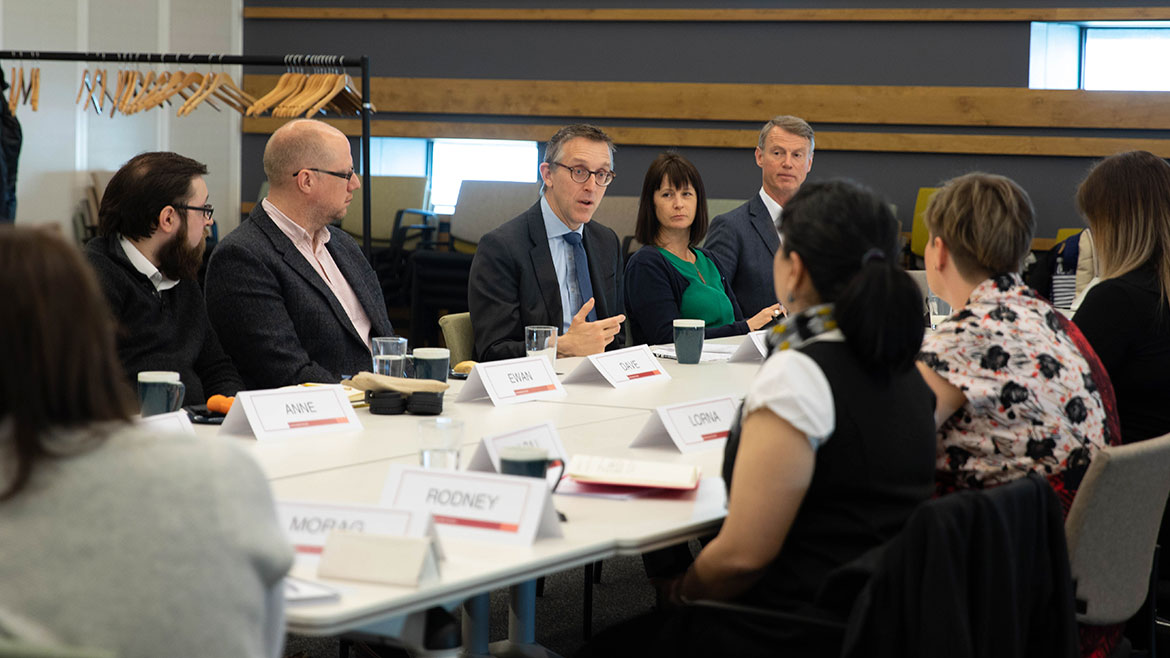