On 29 and 30 April Deputy Governor Sam Woods travelled to Scotland to take part in a series of community engagement events in Glasgow and Dundee. Here are his reflections.

Sometimes I feel it would be very convenient for the Bank if I just stayed at my desk in Moorgate and made decisions on the hundreds of papers pouring into the inbox. But occasionally I manage to escape and broaden my horizons - which I certainly did on my recent visit to Scotland.

The visits organised by our network of Agents around the UK typically focus on meetings with businesses, whose insights on a range of issues are always valuable.

But my Scottish trip also involved a series of engagements with a slightly different focus: conversations with charity leaders and volunteers, and members of the public.

Following some visits to small PRA-regulated firms, at the City of Glasgow College I met our new Citizens’ Panel for Scotland – a group of around 20 people who had elected to join a conversation about the economy and, specifically, the issues that are of most concern to them.

The group is one of 12 new panels that we’re setting up around the UK to enable us to hear first-hand from a diverse range of citizens about their experiences of the economy.

People hadn’t just travelled from around Glasgow but as far afield as St Andrews and even by boat from the Isle of Bute! So the pressure on us to make sure it was an interesting evening for all was high.

The sheer breadth of topics raised by our panellists was striking. Unsurprisingly, Brexit featured a fair bit, but it by no means dominated.

We talked a lot about intergenerational inequality, especially with regard to the housing market, and heard people’s concerns about the nature of employment.

The last of those points – how the low headline unemployment rate belies the fact that many people feel insecure in their jobs or struggling with low pay and things such as zero-hour contracts, was also a prominent theme of day two of my trip, in Dundee.

We began with a Community Forum event in the impressive new V&A Dundee on the city’s waterfront. I think it’s a really cool building but later in the day I met a 21-year-old Dundonian who hates it! Either way it was a good place for us to convene a meeting of around a dozen charity leaders from the local area.

For a couple of hours we discussed a range of issues facing the third sector and the people that the charities work with.

Among them were some vivid examples of how the most vulnerable people in our society are often most affected when the economy goes wrong, as happened with the financial crisis in 2008. More than a decade on, I got the clear sense that some people in Dundee are still feeling the effects.

Despite a host of worries the group was very keen to look forward, to explore solutions, and to commit to collaborate more effectively for the good of the city and its most vulnerable residents.

The Bank of England can’t, of course, solve many of these problems. But if we can convene such gatherings and facilitate such conversations, it seems to me we have a useful role to play. And of course the work we do in the background on monetary and financial stability is an enormously important element of enabling others to tackle these issues.

The rest of my time in Dundee took me away from the waterfront into some of the communities where the social and economic challenges are more self-evident.

At the MAXWell Street Gardens and Community Centre I met a spirited group of people who have created a wonderful asset for their local area which allows people young and old to learn about gardening, cooking and to participate in a range of other programmes, including English language classes. One child gardener gave me a super-tasty chive to chew on, followed by some wild garlic - yum!

At the Main Street Café at Coldside Church I joined local people for lunch in their café where there are no prices on the menu, with customers simply asked to make a donation in the cash box if they can afford it. I was peckish after the herbs in the garden and tucked into a very good lasagne.

And at Steeple Church I met some of the young people associated with the Hot Chocolate Trust, a project that has transformed part of a landmark city centre building into an extraordinary youth centre that is proving a lifeline for many. This was really inspiring - and funnily enough both the Trust and the Main Street Cafe reminded me strongly of the work of an uncle of mine who had a parish in a tough part of St Helen’s for many years.

Ultimately, our objectives of monetary and financial stability are not an end in themselves. Nor can we get a full picture from data alone, as economies are about people. So it’s no surprise that when you listen to more people, you learn more.

I would like to thank Susan Rice for hosting our Citizens’ Panel, Mary Duffy at the Juniper Trust for her invaluable help in organising the day in Dundee and to the Northwood Trust, MAXWell Street Gardens and Community Centre, Main Street Café and Hot Chocolate Trust for hosting me. 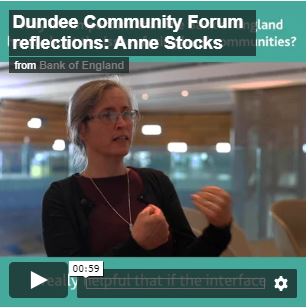 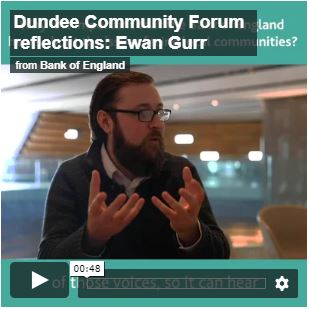 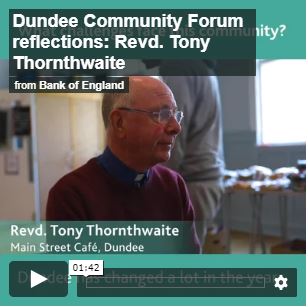