Transactions (‘flows’ or ‘changes’) and growth rates data produced by the Bank of England generally reflect the application of adjustments in order to remove the impact of ‘other changes in value of assets (OCVA)’, also known as ‘breaks’.

See Changes, flows, growth rates.  Amounts outstanding ('levels') data on the other hand, are usually not adjusted for breaks in this way.

These Explanatory notes use the term break-adjusted to relate to amounts outstanding (levels) data series constructed to be consistent with transactions (flows) and growth rates data.  The term break-adjusted is not applied to flows and growth rates data, as it is understood that these data, by definition, incorporate any adjustments required to offset the impacts of breaks.

With the exception of a limited number of high profile monetary aggregates series, the Bank of England does not routinely publish data for break-adjusted levels series. Other than for these exceptions, Bank of England published levels data should be understood to be non-break-adjusted. One reason for this approach is to avoid a potential source of confusion to users, given that any break-adjusted levels series can be arbitrarily scaled. Data users can, however, readily construct break-adjusted series consistent with the published data for themselves. This is explained below.

If break-adjusted versions of both seasonally-adjusted (SA) and non-seasonally adjusted (NSA) forms of a data series are to be constructed, users may wish to ensure that seasonal adjustment factors are preserved in the constructed series (or index).  To do this, it is sufficient to constrain the reference period values of the break-adjusted SA and NSA series to be the corresponding values of the published data in that period.

For a break-adjusted series expressed in index form, it would be necessary to ensure that the ratio of the SA and NSA versions of the index series equates to the seasonal factor, that is to the ratio of the SA and NSA forms of the non-break adjusted data, in all periods.  This can be achieved by setting the break-adjusted NSA and SA index values in the reference period to 100, and 100 x the reference period seasonal factor, respectively.

For the case of a break-adjusted series expressed as an index, suppose that the index level may be written asI in period t, where I=100in the reference period t=0.  Subsequent (and preceding) values are calculated by compounding growth rate factors (forwards or backwards, as required).  In terms of the current period flow and the previous period amount outstanding, these expressions may be written as: 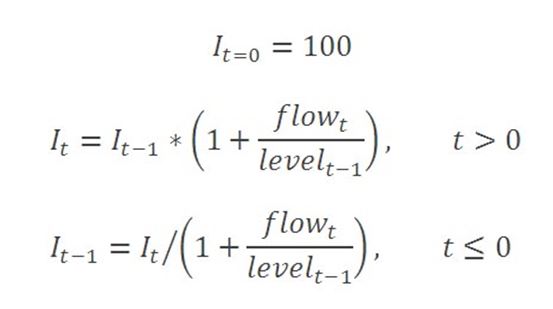 In the above expressions, it might be considered more straightforward simply to substitute the growth rate into the growth rate factors, rather than to express these in terms of the ratio of the flow to the previous period amount outstanding.  Mathematically this would be an equivalent definition, and would reflect an understanding that the break-adjusted data series contains the same information as the growth rates data in combination with a scaling of the data.  However, the approach given above is suggested on account of the fact that Bank of England growth rates data are published (and held) to one decimal place in percentages, and users may prefer to compute break-adjusted data to a greater degree of precision, comparable with that of the amounts outstanding data.
For completeness, the alternative calculation based directly on percentage growth rates, g, would be written as follows:

These calculations are illustrated in spreadsheet format in this worked example.

Published break-adjusted levels series are available on the Interactive Database for a limited number of monetary aggregates.  These are calculated so as to be constrained to the published data for the latest period.

A reference period, index-based approach is the method used by the European Central Bank, where it is termed the Index of adjusted outstanding amounts.  See:  ‘Statistical Data Warehouse, Technical Notes’;  ECB Monthly Bulletin.
The assumptions in this example are that the rounding error of the one month percentage growth rate has an identical and independent uniform distribution over the interval [-0.05, +0.05] over any 12 month period.  This result assumes approximations valid for small growth rates.
Technically, in the application of the X-12-ARIMA package used for seasonal adjustment by the Bank of England, break-adjustments are calculated and stored in the form of a break-adjustment ratio series.  The break-adjusted ratio series is set equal to one in the latest period, and is defined recursively to incorporate break-adjustment multiplicative factors for preceding periods.  A break-adjusted levels series can then be generated as the product of the ratio series and the published non-break adjusted levels series, and the seasonal adjustment algorithms are applied to this version of the data.